Well it has taken a long time, but finally we have some twitchable Barn owls!! Rumours had started just before our Three Kings pelagic that there may be several Barn owls near Kaitaia. Unfortunately, this news was not confirmed until we were all southward bound after the pelagic trip on the night of 8 April 2008 (we got a call to confirm this from Detlef Davies as we were about 1.5 hours south of Kaitaia!).

Kevin Matthews from Kaitaia was contacted by a local who had seen and heard an unusual owl near his house in rural Kaitaia. Investigating this report he found THREE BARN OWLS present at the site. On 5 April 2008 he managed to capture one of the birds which had badly broken its wing (pictured below). This bird was transferred to Rainbow Springs (Rotorua) where it underwent surgery and seemed to recover reasonably well, but with such a major break to its wing, release is uncertain.

Following the capture of this injured bird, at least one of the other remaining birds spent a lot of time calling and flying around the ‘territory’ as if having lost a mate or juvenile. It is suspected this injured bird may have been a juvenile raised by the ‘pair’ that remained, but this is yet to be determined. Even more of a mystery is how these birds came to be at this site. There have been very few records of Barn owl recently for New Zealand, and for two birds to arrive at the same location or find each other after arriving is interesting. Of course it must be kept in mind that Barn owls have managed to find their way to many of the islands in the Pacific.

Several people made the trek to see these birds, with Detlef Davies and several others heading there and seeing the birds on 12 April, Tim Barnard getting them on 14 April, and Phil Hammond hearing them on 21 April (as well as finding a white-winged black tern at Unahi). Brent had initially planned a trip for 14 April to coincide with Tim, but the weather looked dodgy in the morning, and the 10 hour road trip from Hawkes Bay to Kaitaia made it necessary to get a really good weather forecast. Of course when Tim saw them that night after only a very short wait as dusk fell, it was a little upsetting! However, Brent headed northwards on 23 April, being joined by Suzi Phillips in Auckland. We met with Kevin Matthews in the early evening and then headed to the site, meeting with the owners and waiting patiently (!) out on the hillside near where the birds had been seen. It seemed like an eternity, but sure enough as predicted by Kevin, one of the birds arrived and perched in a tree approximately 80m away. We watched it for about 2-3 minutes in the torch light and then about 10 minutes later when we rechecked the tree the bird had gone, but another 10 or so minutes later and a bird called up the hill, and another down below us. The bird up the hill flew down and met with the other, with both calling softly to each other, indicating to me they are definitely a pair. Having seen one of the birds perched, another flying in the torchlight, and hearing them calling, we felt we had probably done as well as we could expect and so left them in peace. Russell Cannings during his whirlwind North Island tour saw the birds in late June. As Tim had mentioned in his post to BIRDING-NZyou really couldn’t find a more ‘English’ type setting with hedgerows, rolling fields, and patches of trees. Perfect habitat it would seem for these owls, and hopefully they stick around.

UPDATE – The two remaining birds have been seen regularly through to early 2009, with Kevin Mathews having kept a close eye on the birds. Kevin believes the birds have again attempted to breed during the 2008-09 summer and took us to see the birds on the evening of 3 April 2009. 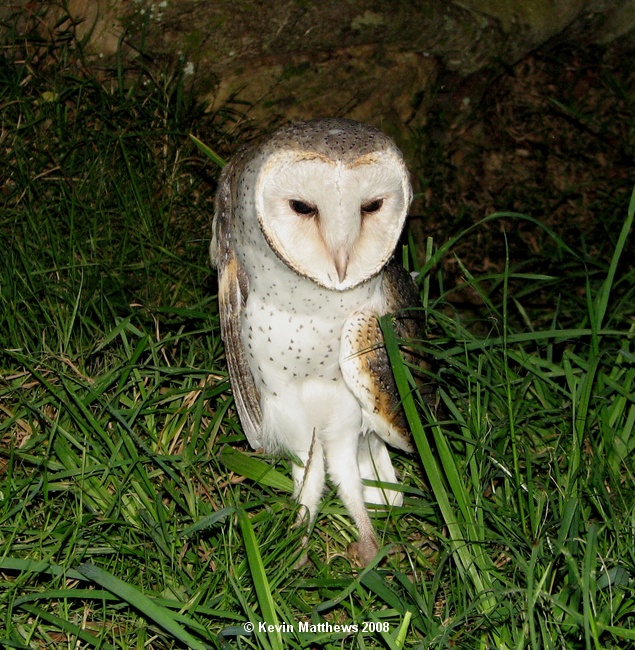 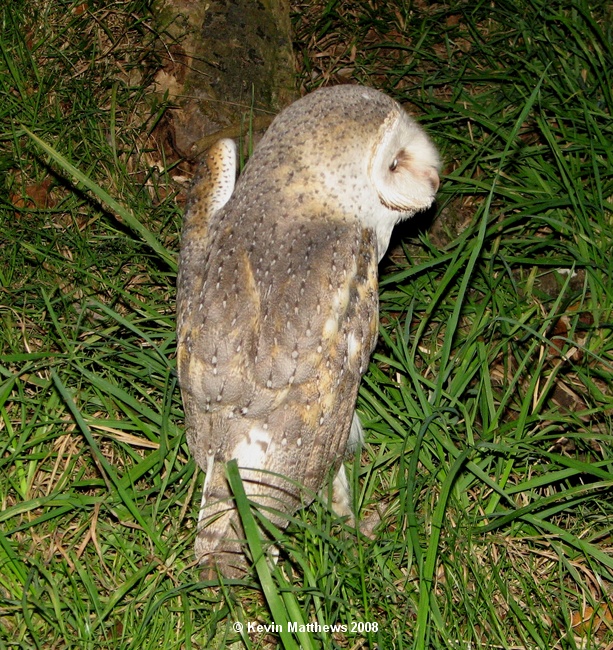 Thanks to Kevin Matthews for the use of his images above, and for alerting us to these fantastic birds. All the above photographs are copyrighted. If you would like to use them, then please contact me first.