Whilst still leading the same Wrybill Birding Tours, NZ 21-day tour, that had already recorded a Latham’s snipe and a greater sand plover, Brent stopped at the Hokitika Sewage ponds to see whether the Cape Barren geese Brent and Sav had seen there in November during another tour, were still there. This site always looks like it might hold a good Aussie duck or two, and as Brent pulled up he suggested that if waterbirds from Aussie were going to turn up, this would be the spot. Halfway through scanning the mottly assortment of mallards roosting on the far bank of one of the ponds a funny reddish-brown head was seen, and perhaps of more interest, the fact that the bill on this bird was short and black. Not much more was visible until the bird stood and revealed itself to be a male Australian wood duck! It would seem that this is about the 7th record of the species for New Zealand.

The bird seemed tired, standing for only a few minutes, grazing momentarily, and then stretching one wing and sitting down, this time completely obscured by the other ducks. Talk about the right place at the right time!

The below snaps were taken through the scope, so are not up to the usual standard, but clearly show the bird. 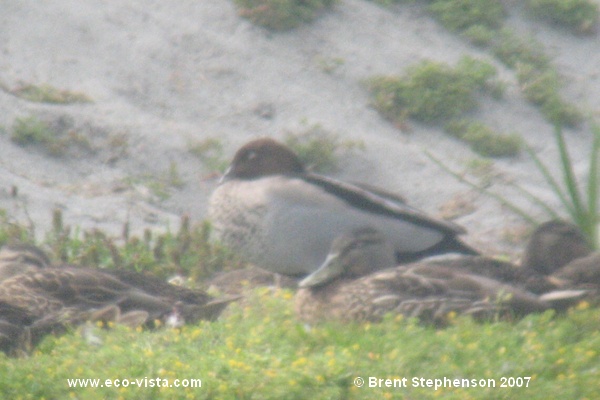