The big news of the day is that I finally got to see the black kite at the Mercer site where it has been seen by model airplane people several times before. I got a tip off at 245pm that it had been around for about an hour at that stage. I was by coincidence (believe it or not!!) going to go to a meeting at Miranda later in the afternoon, so I left early and quickly and got there at 3pm. I found nobody and no bird. After driving and looking around for an hour I finally found it just before I left for Miranda. It did a low pass overhead at about 15m and then went over a hill. I eventually found it the other side and got some more distant profile photos (hopefully!!), before it and I left. This ends two years of frustration as the bird has been seen infrequently over that period by a number of non birders at times within a km. from my home!!. (yet another rare bird report to file!!)

Further to Brent’s note wanting to know the exact spot where the black kite was seen, I can report that I saw it again at a distance yesterday about a km north flying over a wetland area. The best spot seems to be up either Koheroa Road or Kellyville Road to the east of Mercer township on SH 1. Both roads mentioned meet at the top of the hill with good viewing points just before the road intersection. In westerly winds the bird soars along the ridgeline, and often shadows radio controlled gliders. If they are flying the gliders near the trig on the south side of the road have a talk to the pilots. It covers a very large area, with an unconfirmed sighting near Drury on Saturday, my sightings at Mercer on Thursday, and near Pokeno on Sunday as examples. This is likely to be the same bird seen by Ted W… at Mangere several months ago, with other unconfirmed sightings near Pukekohe, Mangatawhiri, Waerenga and Te Kauwhata. The most consistent place seems to be Mercer, but keep your eyes open anywhere north of Hamilton, and check all Harriers, particularly their flight and tail. 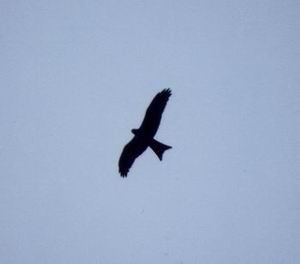 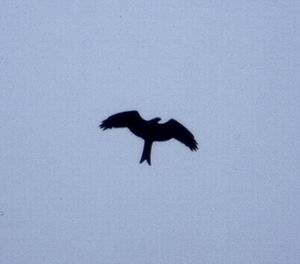 The above two shots were taken by David Lawrie on 09/05/02. They clearly show the long diagnostic forked tail and long winged appearance of this species. This constitutes the fourth record of this species in New Zealand.