Well it has been a great few weeks for those on tour.  Lot’s of good birds around, and on the whole some fairly reasonable weather.  Brent and his group continue a great run through the country, leaving the North Island with every gettable endemic, and two great pelagic.  Now on the South Island in Kaikoura, and just over half way through the tour, the tally stands at 135 species through to the end of yesterday, and a lovely morning on the water with Gazza from Albatross Encounter this morning raises that a few!  A daily blog continues to be uploaded here on Brent’s ‘B1RDER’ blog.

Neil also had an enjoyable five days with a couple on a private tour.  A chance to show them some birds around the northern North Island.  They had a great few days and got some excellent birds including Fairy tern, NZ dotterel and other shorebirds around northern estuaries, time on Tiritiri Matangi with Kokako and Takahe, blue duck near Turangi, etc.

Matt and his group were left in Turangi on the last post, and they continued through to Napier, revisiting blue duck again that morning.  Nice forest birds on the way, but no long-tailed cuckoo or falcon evident.  They had the plumed whistling duck in Napier, as well as a stinking breeding plumaged cattle egret, and then found some banded and black-fronted dotterel to enjoy.  Next day they found a bittern and then a great pipit, before heading across to the Foxton area.  They had a quiet time at Manawatu Estuary with a Pacific golden plover, bar-tailed godwits, etc but a good crossing of the Cook Strait with spotted shag, a juvenile wandering which is always good to see, a grey-faced petrel, four Westland petrels, a white-capped albatross, and a sooty shearwater.  Morning out on the Marlborough Sounds produced three King shags, with several others flying, and playful dusky dolphins.  On an island they had four orange-fronted parakeets, with two being watched closely for about 15 minutes and giving great views.  On the way back to Picton a few Arctic skuas (Parasitic jaegers) and a ‘flock’ of reef egrets!  Afternoon had Cirl bunting, glossy ibis, hoary-headed and Australasian crested grebe, and a Northern shoveler!  Little owl after dinner capped off a pretty great day.  A great pelagic off Kaikoura with Albatross Encounter in the morning had the usual suspects, plus a short-tailed shearwater, a Buller’s shearwater and a grey-faced petrel.  They did a second round in the afternoon, which netted nothing new but more great looks at these awesome birds!  On south, with a stop at a couple of wetlands, netting Cape Barren geese and then black-fronted tern and a distant greater sand plover, plus a few wrybill.  Kea found up near Arthur’s Pass, and then a female falcon and a kea having an aerial battle – pretty cool stuff!  Matt and his group enjoyed the West Coast, and then a great Okarito kiwi experience with Ian Cooper and Okarito Kiwi Tours.  A several minute view of Okarito kiwi was a prize of the day.  The next day was pretty torrential rain for the team, but good views of Fiordland crested penguin, and an analysis of wet weather gear that suggested nothing, no matter where, had been built for West Coast, NZ rain!  But as the rain cleared some nice yellowhead, and yellow-crowned parakeet.  So all good in the end.  But more difficulty with the Milford Road, and closures meant a day forest birding without rock wren.  They did see good rifleman, brown creeper, yellow-crowned parakeet with a nest, kaka, and robin.  They headed to Matt’s home turf the next day, with chestnut-breasted shelduck on the way.  Pretty good crossing with Foveaux shag, a Buller’s albatross, and then Southern brown skua.  Even a couple of Fiordland crested penguin from the ferry, and then a couple more from the water taxi on the way to Ulva.  Great Ulva Island with excellent South Island saddleback, yellowhead, both parakeets, and all the usuals, and then six Southern brown kiwi and another morepork that evening.  A very windy but incredible Stewart Island pelagic with excellent Fiordland crested penguins, Southern brown skua performing, hundreds of white-capped albatross, and 20+ Southern Royal albs.  Grey-backed, white-faced and black-bellied storm petrels all put in an appearance, as well as great broad-billed prion views, a single mottled petrel, and a single Buller’s albatross.  Good numbers of other things including fairy prion, Northern giant petrel, and Cape petrel. 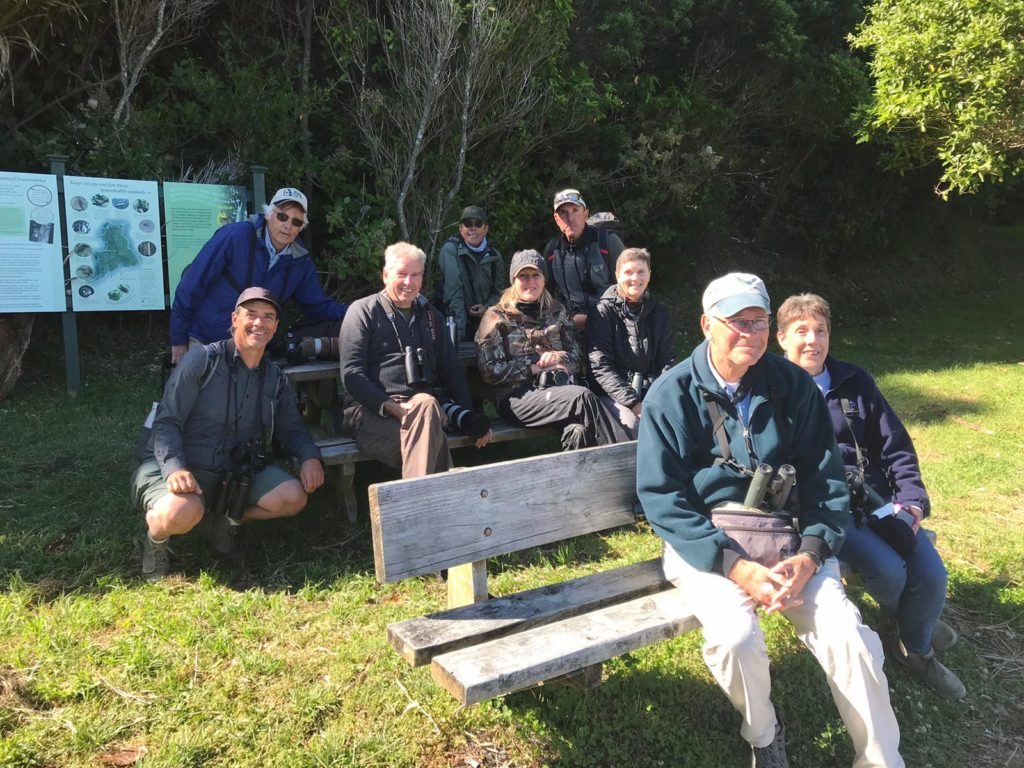 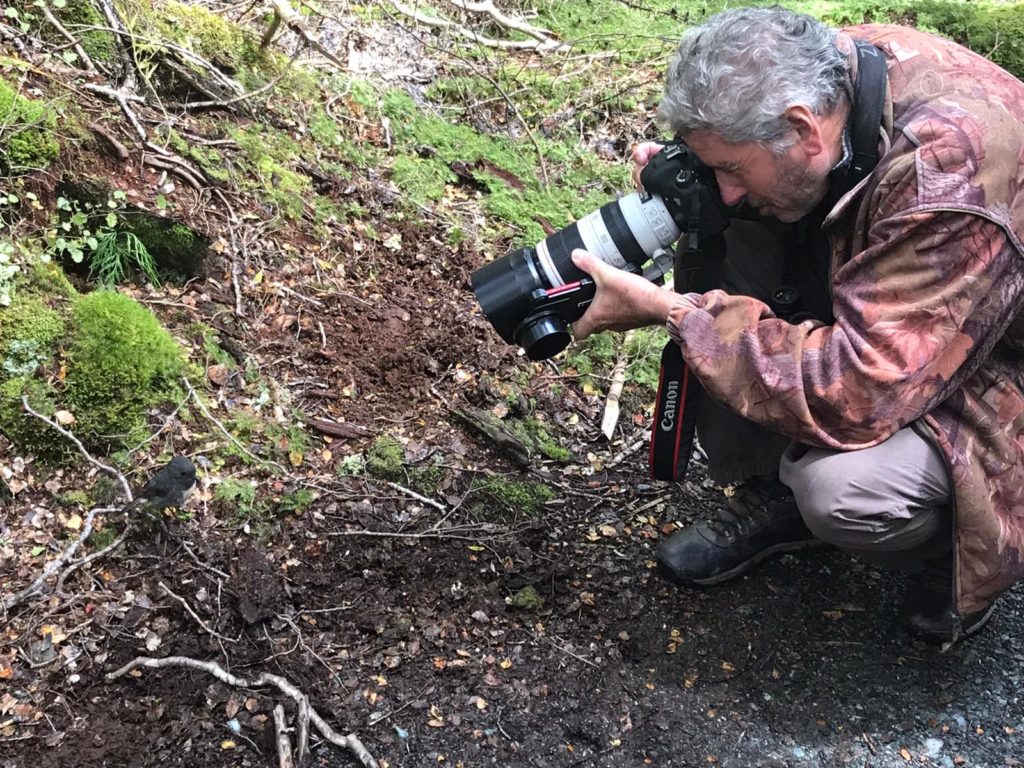 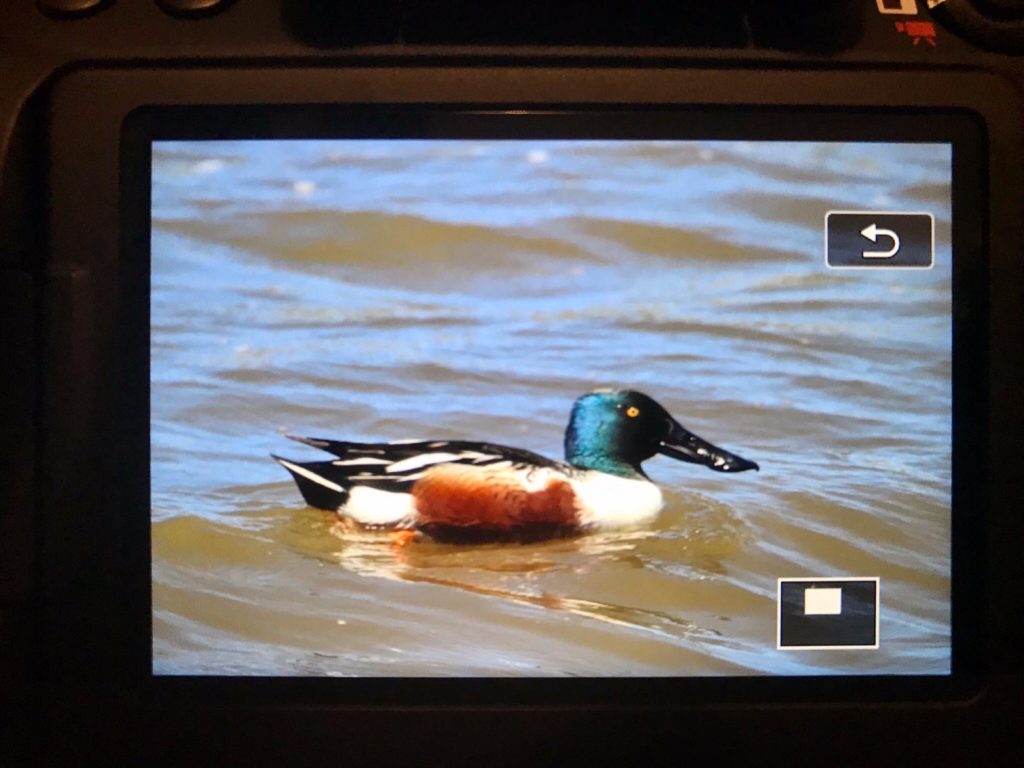 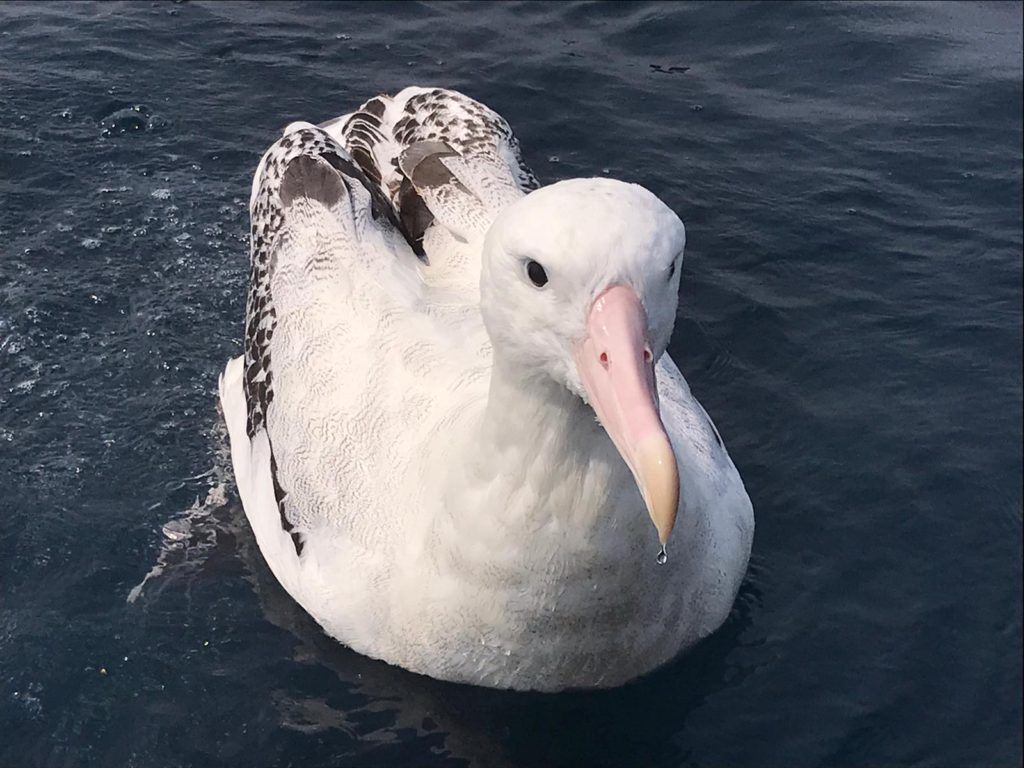 New Zealand wandering albatross in nice and close off Kaikoura 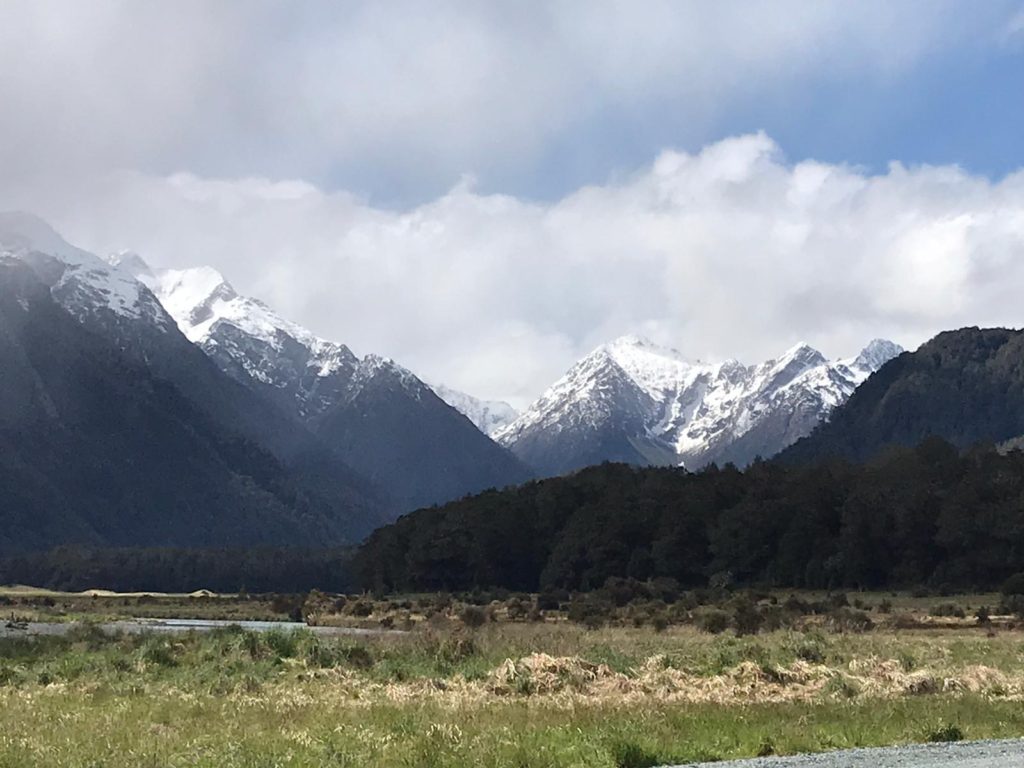 Mountains showing an unseasonal amount of snow near Arthur’s Pass

Phil and his group were nearing the bottom of the South Island on the last post. They had an awesome day on the West Coast with four great Fiordland crested penguins on a beach, and then some great yellowed in mainland forest.  Always nice to see them there, and in areas protected by hard work from Department of Conservation.  They caught up with another falcon – yep we will call Phil the falcon whisperer! – and black-fronted tern.  Next day in the Milford area was a tough one, with the road through to Milford having access closed in places, and our regular spots for rock wren inaccessible, and torrential rain making it a soggy day, but the waterfalls were spectacular.  Next day Phil and group headed to Stewart Island with nice black-fronted terns along the way, some Foveaux shags before a quiet crossing to Stewart Island, but an amazing afternoon on Ulva Island.  Maybe 30 yellowhead, many of them very close, and even a Hooker’s sealion seen on a beach.  The day ended with five Southern brown kiwi, including a bit of kiwi ‘hanky-panky’!  Full day pelagic out of Stewart Island with three species of penguin, including a yellow-eyed penguin that gave a great show, white-chinned petrel and Southern Royal albatross which were both needed for the trip, and nice close broad-billed prion and a black-browed albatross.  The group left Stewart Island the next day and had nothing new on the ferry crossing, but later in the day great Otago shags and yellow-eyed penguins.  Last real day of birding and Phil and his group had a beautiful day with black stilt, black-fronted terns and black-billed gulls at a wetland.  Later that afternoon a Baillon’s crake gave nice views, and a lovely last night’s dinner.  On the way to Christchurch a great view of a chukar, and then the last bird of the trip, a mute swan.  Trip tally of 162, 65 endemic breeders, so a very good list and some great birds and fun along the way.  Well done Phil! 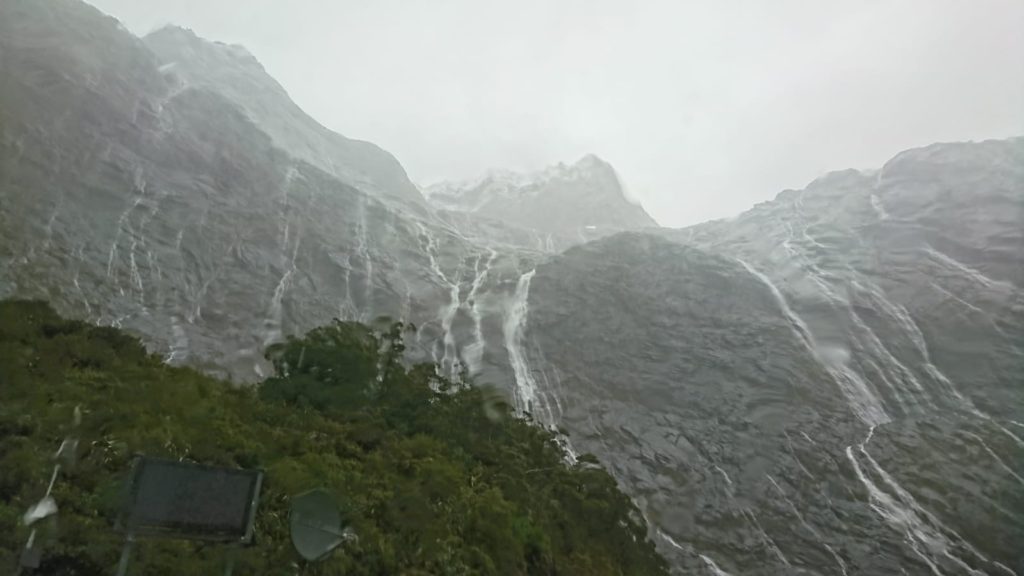 Waterfalls abound in a wet and wild Milford area 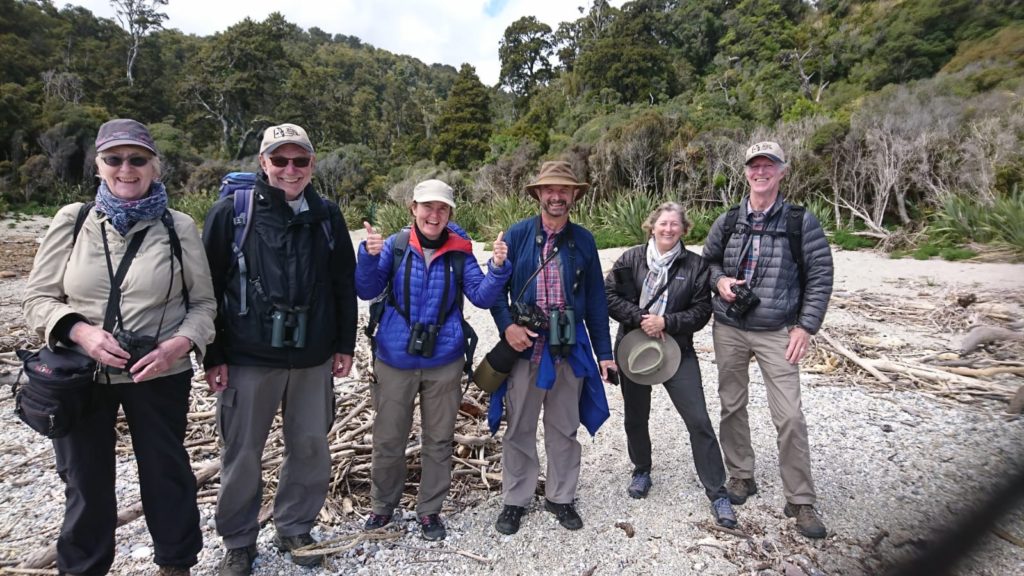 Sav then set out from Auckland a few days ago with his group.  A great first day with Australasian gannet, fairy tern, and buff-banded rail.  Later in the day Australasian little grebe and NZ grebe, plus brown teal and a bonus NZ pipit.  Lots of kiwi calling that night but not a single one showed itself to the group – you win some you lose some!  Next day a pretty incredible pelagic off Marsden Cove with NZ storm-petrel, lot’s of Pycroft’s petrels, little shearwaters, and the other usuals plus a huge blue shark and a pod of common dolphins.  A great next day, with more fairy tern sightings, then whitehead, kaka, robin, and saddleback.  Also more buff-banded rail and brown teal, with morepork at the end of the day.  A great Hauraki Gulf pelagic the next day, with NZ storm-petrel, thousands of Cook’s petrels, 10’s of thousands of fairy prions, and still a couple of white-capped albatross – very late for them up here!  Tiritiri Matangi put on a show with multiple kokako and takahe…let’s see if the little spotted kiwi play the game!