During the pelagic trip, organised by Brent Stephenson, off Whitianga (on the Coromandel Peninsula in New Zealand) on 25 January 2003, an unusual storm-petrel was seen (see Trip report). The boat was south of the Mercury Islands, and white-faced storm-petrels had been in almost constant view for the previous hour or more (approx. 150 birds in all), when Sav Saville spotted a different bird approaching from the north. He called it as a “white-rumped storm petrel” having initially seen what seemed to be an all-dark upperside with gleaming white rump. BS quickly got onto the bird as it turned to show its undersides, revealing a big flash of white.

The bird made a couple of orbits and then flew strongly away ahead of the boat. The views were quite close in good light, but fairly brief (about 1 minute), from a pitching deck. Those who saw the bird best (including BS and SS) were quite convinced that it was a black-bellied SP, Fregetta tropica, (even though the time and place were strange) because they all thought that the bird actually had a dark stripe through the centre of the belly. Photographs later showed that this was not the case, and the ‘stripe’ must have been a light effect, perhaps aided by the dark streaking on the upper breast. 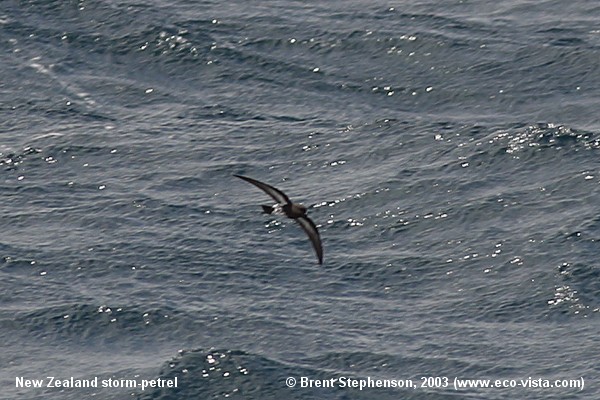 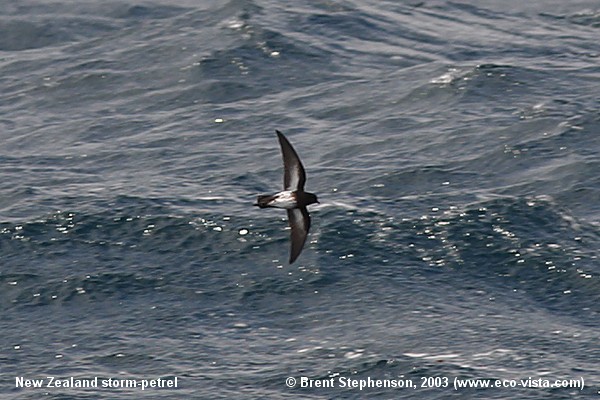 The bird as portrayed in the photos is somewhat paradoxical. The normal criteria for separating the 2 Fregetta SPs are hugely complicated by the known existence of birds (of both species) exhibiting plumage characters of the other, e.g. F. tropica can have white bellies and F. grallaria can have black bellies. Much emphasis is placed on the projection of the toes behind the tail-tip – which this bird clearly has. However, recent conversations with some seabird experts has suggested that toe projection may not be as cut and dry as suggested by such books as HANZAB, NZ Fieldguide, and Harrison.

Several birders with Fregetta experience have been consulted and the majority lean towards F. tropica – though none had seen a bird with similar plumage. Foot-projection is considered important, the white axillaries point away from darker individuals of F. grallaria, and although this bird shows no sign of a pale chin that is thought to be a rather variable feature. That may have been the end of the story if another intriguing possibility had not been suggested….

The skins of the presumed extinct NZ Storm Petrel, Oceanites maorianus, show the same streaked breast effect as our bird. O. maorianus was sometimes considered as a subspecies of Wilson’s SP, Oceanites oceanicus, but had whitish underparts and underwing, it was also slightly bigger. The upperwing pattern of the Whitianga bird looks a lot like a Wilson’s (and arguably not like a Fregetta), but just as importantly, the jizz is wrong for a Fregetta, which have fatter bodies and shorter, broader wings than this bird (imagine the photos as silhouettes – still look good?). Foot-projection is good for a Wilson’s-type bird. So could this actually be an individual of an extinct species?

If the probability of occurrence was not so low it might be easy enough to place this bird as O. maorianus. Every available fact seems to indicate that it is – streaky breast, under and upperwing pattern, leg length, size, shape and structure. It is also quite improbable that either of the Fregetta petrels would be off the Coromandel in January (though tropica has to be more likely than grallaria).

We don’t know for sure what this bird is, and would welcome any comments, especially from anyone who has a cast-iron identification. 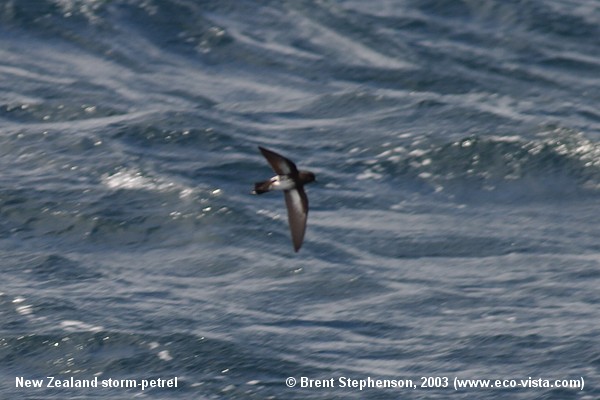 Of particular note have been comments made by one person, who has seen the three specimens of New Zealand storm-petrel (one held in London, the other two in Paris) and suggests that our bird is so close to two of the specimens they look like the same thing! As yet we do not know the finer details of the specimens’ plumage characters. We believe they did have a pale underwing and had dark webs to the feet (unlike the yellow webs of Wilson’s), and are currently pursuing this.

Something else that is worth keeping in mind. This bird was still present in the 19th century, and we are all aware of seabird species that have been ‘rediscovered’ following their supposed extinction, one of these breeds only a few hundred kilometres away on the Chatham Islands. What’s more, New Zealand is surrounded by a huge number of small offshore islands, many with large seabird colonies, and most rarely visited. A tiny, nocturnal, storm-petrel is not the sort of thing that is going to be easily discovered, even by people actively looking for it – the chance of ‘bumping into’ something like this are a million to one. The fact that very few pelagic birding trips are run out of most New Zealand ports would also mean the likelihood of seeing one at sea is more than a million to one. So at the moment all we can do is ponder, collect more information, and see what unfolds…….

Key differences we see between our bird and black-bellied SP: 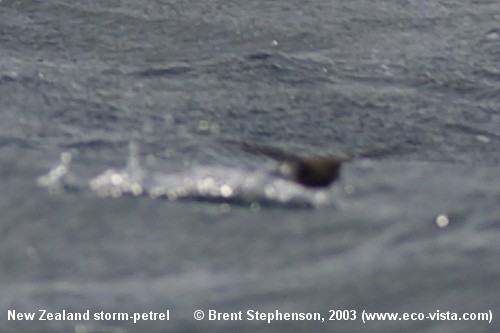 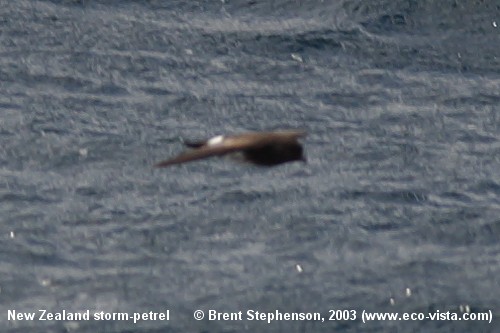 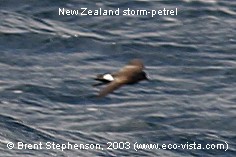 All above photographs are copyrighted. If you would like to use them, then please contact me first.