A ruff was first discovered on the Stilt Pond at Miranda by the team conducting the Firth of Thames wader census on Sunday 20 November 2005. It was found in time to be assessed by the wader ID course participants and confirmed by Adrian Riegen. A great bird, showing well with 14 Sharp-tails and 2 Pectorals for comparison.

The bird was again reported by Tim Barnard on 22 November 2005 at the same location. However, he needn’t have made the trip. Reported again on 4 Dec at the same location, it must have decided to move on shortly after, as Tim found the bird at his own home stomping ground of Maketu on 18 December 2005.

The bird was subsequently seen throughout Tim’s ‘Purple Patch’ of vagrant waders – see other Rarities for some of the other birds Tim saw. The photo below was taken on 4 January 2006, and the bird was last seen on 15 January 2006. 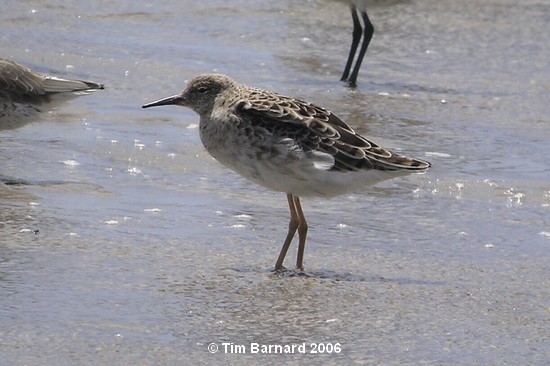