An email from Peter Russell to BIRDING-NZ on 21 February 2007 was the first we heard of the arrival of five plumed whistling ducks that day to a couple of dams on the property of Neil and Julie Candy, near Woodville. The five ducks had been spotted by Neil and Julie, who instantly recognised them as something different. Tim Barnard sped to the site on 23 February and found all five birds still there, and apparently content, taking the photos below. Unfortunately, at the time Brent was in Melbourne and Sav was in the South Island on tour. They were last seen for sure on 24 February, when several other people on BIRDING-NZ saw the birds, but when Brent managed to get there on 27 February they had gone! They miraculously reappeared on 3 March, of course by this time Brent was back on a cruise ship and unable to ‘twitch’ them, but Sav picked the birds up on 4 March, and they were still all there on 10 March when Steve Wood saw them. However, a clay target shoot on 11 March seems to have caused the birds to move on, and they were well gone by the time Brent got home on 14 March…..booo hoooo!!!

“While Brent and Sav were away on tour, a small possee of five plumed whistling ducks decided to drop into their backyards (literally in Sav’s case). The birds were first reported by Peter Russell to BirdingNZ on 21/2/07 on farm ponds owned by Neil and Julie Candy, just outside Woodville. The ponds are barely a year old – created by Neil and Julie as a Ducks Unlimited project. The birds had first appeared on 14/2/07 and were found by the owners standing on a wharf overlooking one of the ponds.

I arrived on 23/2/07 and found local birder, Ian Armitage looking at five birds standing on some exposed sand by a partially drained pond. The birds were very wary and took flight – calling as they circled overhead. Eventually they returned to the ponds, settling on the water with a pair of immature NZ grebe. The last definite sighting of the flock was the following day. With Brent’s wood duck at Hokitika and several chestnut breasted shelduck scattered around the deep south, it is beginning to look like a good year for Australian waterfowl…”

Interestingly on 2 April a plumed whistling duck was seen on Tiritiri Matangi Island in the Hauraki Gulf by DoC Ranger, Ian Price. Shortly thereafter a bird, probably the same as the Tiri bird which was only seen on the one day, was seen at Tawharanui Regional Park. This bird at Tawharanui was seen through till at least 3 June, but wasn’t there on 9 July when Brent went to have a look on the off-chance it was still around.

Thanks must go to Neil and Julie, firstly for putting out the call to people that the birds were there, and secondly for allowing BIRDING-NZers and others there to see the birds on their property. 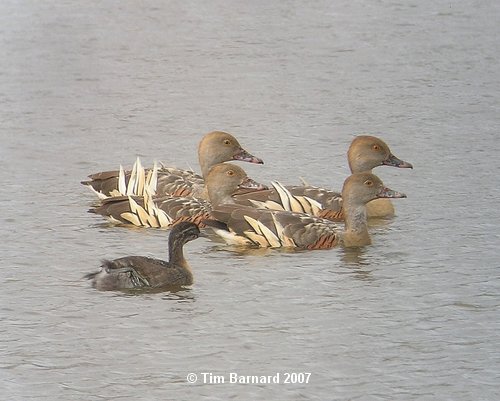 Above: Four of the ducks with a young New Zealand grebe (dabchick) 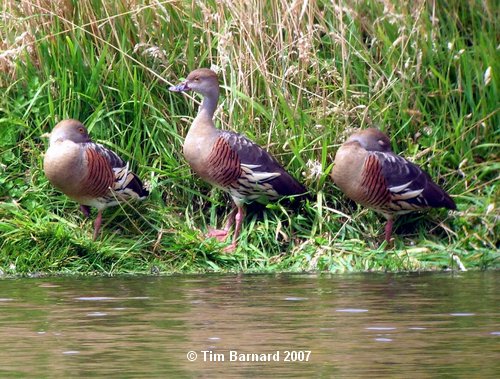 Above: Three of the ducks resting on the shore