The below grey plover (top middle of the first photo – the rest are golden plover, and the right hand side of both lower pictures) was found by Sav on 14 February 2008. The top image of the birds in flight gives a clear indication of the size difference between grey plover and Pacific golden plover. The two photos by Duncan also show the common tern seen only on 22 March 2008. This is only the second ever record for the Manawatu Estuary (first was in Feb 1991). Grey plovers are quite a rare bird throughout New Zealand with only a couple of records annually. This birds plumage is quite odd, and made what would normally be a straight forward identification much more difficult. The bird stayed at the estuary for many weeks and was last reported on 9 May 2008. 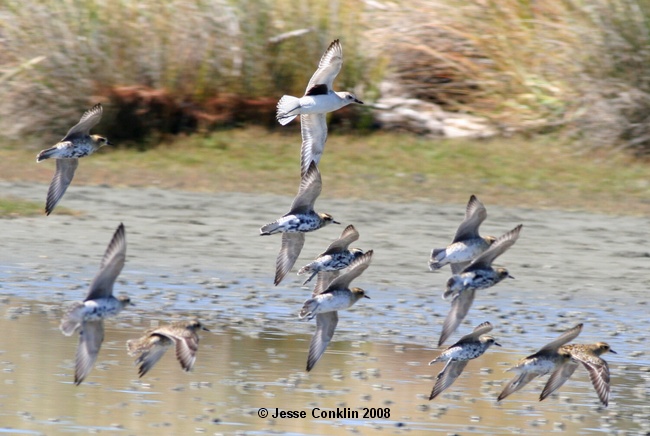 Thanks to Jesse for the use of the above image. The above photograph is copyrighted. If you would like to it, then please contact me first.

Thanks to Duncan for the use of his images. The above photographs are copyrighted. If you would like to use any of them, then please contact me first.