Whilst on tour, Tony Wilson discovered a moulting penguin at the Seal Colony, Kaikoura Peninsula, on 13 February 2007. The bird was distant and was tentatively identified as a macaroni penguin based on the bill size. They again searched for the bird the next morning, but were unable to relocate it. Subsequently, Paul Scofield reported via BIRDING-NZ that an American birder had sent photos of a moulting erect-crested penguin from the same site the week before, and on 14 February Brent and Tony Crocker (both working on the cruise ship M/V Clipper Odyssey which just so happened to be in Lyttleton for the day!) zipped up to Kaikoura to look for the bird in question. They scoured the Seal Colony area, finding the wandering tattler amongst turnstones, but no moulting penguin…..how hard can it be to find a moulting penguin for crying out loud!! A quick scan of the coastline from the South Bay Reserve brought no joy, and their time was up, having to head back to meet the ship. Sav justed happened to be (!!) in Kaikoura the next day on tour, and they successfully found the penguin on 16 February, with John Barkla getting the photos below. From these photos the bird can be identified as a first year erected-crested penguin. The bird was still present on 22 February, but appeared to have almost finished moulting and was not reported after that date.

On 19-20 February a moulting royal penguin was found near Cape Palliser….how many other vagrant moulting penguins were not found this summer??!! 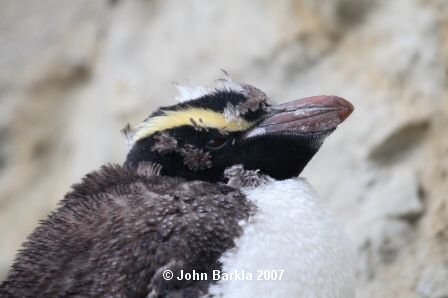 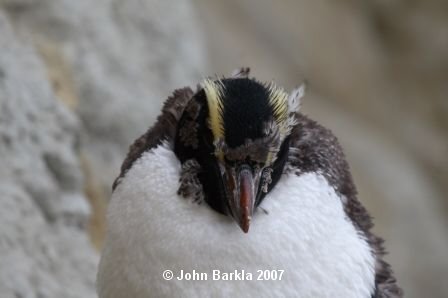 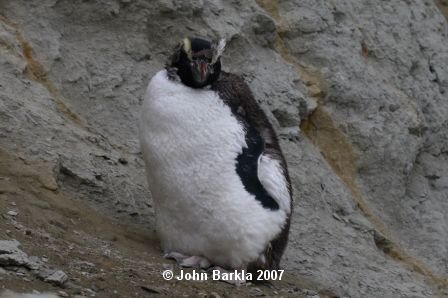 The above photographs are copyrighted. If you would like to use them, then please contact me first.