18/04/06 Dunlin, Calidris alpina, at ‘Seagrove’ on the Manukau Harbour, Auckland

This dunlin was spotted by David Lawrie, Ian Southey and Jenni Hensley at Seagrove in the Manukau Harbour on 18 April, after a tip-off from Tony Habraken who had earlier noticed a ‘short-legged curlew sandpiper’ while checking for colour-bands and flags. Ian saw it again on the 19th, and today (the 20th) I managed to head out for a look. Luckily, despite there being only 16 wrybills instead of the 250 present when David et al. had first seen it, the Dunlin was in with them! While the tide was very slow to move the birds in, eventually the wrybills came my way and I crawled their way, until finally I was just 1.5 m from the nearest wrybill and 3 m from the dunlin (see the photos taken below!). Conditions were perfect, and I quickly raced through my memory card. There are no identification problems with this bird – the blackening underparts are characteristic, and the thicker and slightly shorter bill than on a curlew sandpiper is noticeable. Another name for the dunlin is red-backed sandpiper, and some of the reddish breeding plumage scapulars are becoming evident. All in all, a pleasant distraction from band searching!

Well a rather stressful afternoon ended with smiles all round. A group of nine birders headed to Kirk’s this afternoon, and were greeted by relatively empty mudflat……oh oh….it was looking like the biggest twitching dip in NZ history for a bit!! At least 6 whimbrel were there, amongst about 200 godwit, 150 knot, 4 little tern, and a few turnstone – some of the former were very nicely coloured. Only about ½ dozen wrybill were present, and NO dunlin to be seen! Panic set in, Tim Barnard got very quite, and the mood changed…..or so it seemed. After a bit of scanning around the area, we decided on a quick check of Clark’s Beach and then on to Karaka (Kidd’s). No small waders at Clark’s, off to Karaka after phoning the landowner.

Arriving at the mud a small flock of wrybill was present, and there it was……sticking out like the proverbial in amongst about 10-15 wrybill. Nice little bird, and possibly more black belly showing than yesterday – apparently it can happen that fast! Great views of the bird preening and then feeding actively, but unfortunately not approachable today and on the move quite a bit, flitting from place to place. Thanks to Ian Southey for making the visitation arrangements.

Sav and Ian Southey, along with two other birders, checked out both Kidd’s and Kirk’s late on Sunday 22 April. Unfortunately no sign of the bird at either location, despite a total of around 90 wrybill at the latter. Rather disappointing, especially for Sav, although hopefully the bird may still be around. 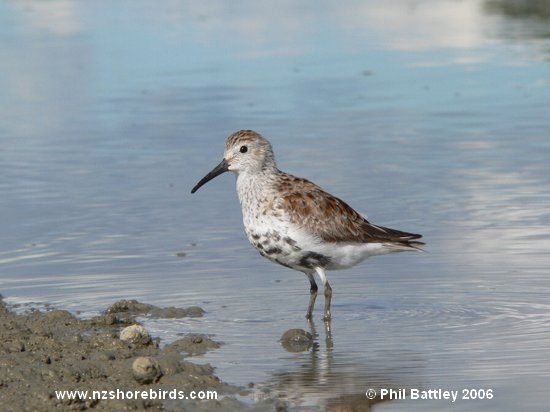 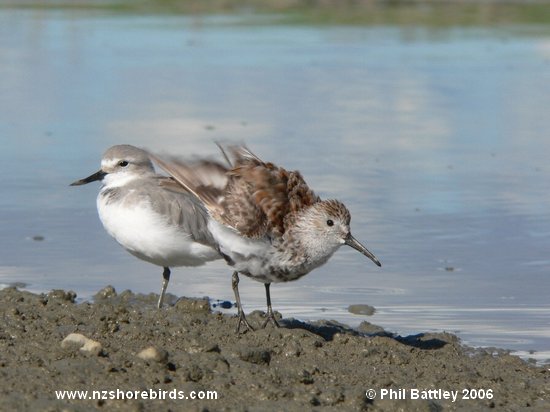 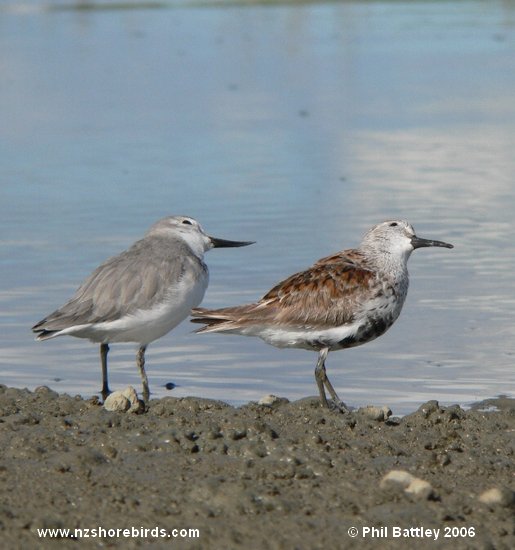 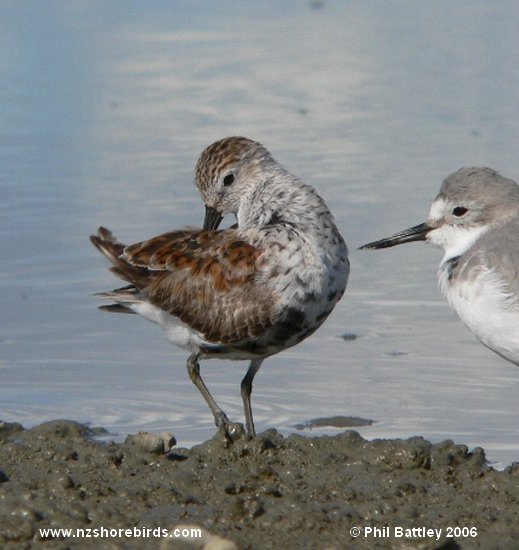 The above photographs are copyrighted by Phil Battley. If you would like to use them, then please contact myself or Phil first.