Matt’s tour in the South Island

DAY 10  Before catching the ferry south, we headed back to Foxton Beach and the tide was coming in, and pushing all the birds towards us. Bar-tailed Godwit, Red Knot, Pacific Golden Plover, Banded Dotterel, plus two Wrybill (always a favourite). Scopes and bins searched every movement, we soon found a new bird for the tour, a Curlew Sandpiper what a little gem!
Then a dash of white to the right caught our eye, moving out of the flooding creek a very showy Little Egret just appeared. Awesome, not a very common bird in NZ. Into windy Wellington and onto the ferry across to Picton. Wow! It was blowing as we crossed the Cook Strait and quite a few birds were seen, our first Salvin’s Albatross and several White-capped Albatross, plus plenty of Fluttering Shearwaters and quite a few Sooty Shearwaters. As we entered the Sounds the wind dropped we had our first good looks at Spotted Shags, and our first Arctic Skua and we witnessed a small pod of Dusky Dolphins join the bow of our ferry to welcome us to the South Island.

DAY 11  Today was all about the Weather! We awoke in Picton to very heavy rain and high winds, which would join our group for the whole day. Wet weather gear on, we headed back out to the Sounds, and within a short while we had great views of 6 King Shags sitting on high rocks. Mega! And even better looks at more Spotted Shags. Then onto an island where we were welcomed by a pair of very soggy looking Weka.
The next couple of hours where spent looking for Orange-fronted Parakeet, in very wet and windy conditions. We left the island without our prize, the the weather had beaten us and this was my first time on dipping on this endemic. Bugger! After a consoling hot coffee and pie we hit the road south, Next stop we found a new bird for the list in the shape of a least 5 Glossy Ibis in amongst the Royal spoonbill breeding colony, we could not find the Cirl Buntings that hang around nearby, probably like us they were trying to hide from the wind and rain. As we headed south the wiper blades on the van worked overtime. A brief stop at Lake Elterwater paid off, as through the rain we found one of the Hoary-headed Grebes swimming around in front of us, along with larger and stunning looking Great-crested Grebes.
Another stop north of Kaikoura we witnessed hundreds of Hutton’s Shearwaters flying past the headland joined by a couple of larger Northern Giant Petrels and great to see and smell lots NZ Fur seals back on the rocks below us…
Straight into the motel, we all put the heaters on full blast as boots, jackets, and trousers started to dry out as we all had hot showers!

DAY 12  Blue skies greeted us the next morning and great to be back in Kaikoura, first stop the Esplanade and better views of NZ fur seals, and a few Banded Dotterels running around the beach. Up to some paddocks to try and find some Cirl Buntings, but we had no joy. But the main reason to be in Kaikoura is to do a pelagic or two, and they did not disappoint. Both trips where fantastic, Wandering Albatross, Northern & Southern Royal Albatross, Salvin’s & White-capped Albatross and a lone Black-browed Albatross. White-chinned and Westland Petrels always great to see together. And the always argumentative Northern Giant Petrels plus Cape Petrel and the local Hutton’s Shearwaters, plus a single Buller’s Shearwater. and a couple of Grey-faced Petrels, always a bonus. Not forgetting the Arctic Skua and a playful pod of Dusky Dolphins. And spending time with the legend that is Gary ‘Gazza’ Melville!
It wasn’t all seabirds, near to Kaikoura we also saw our first Brown creepers/Pipipi in the local forest and found a very showy Little Owl.
But the big storm the day before had tripped us up, as a bridge into Arthur’s Pass had collapsed,S o we had no chance of spending the night in the Southern Alps. So once again Sav worked his magic behind the scenes. Thanks mate!

DAY 13  Up bright and early for a second attempt on finding a Cirl bunting, but over an hour later still no joy. Then time to leave Kaikoura and onto driving our detour through the majestic Lewis Pass and down to the West Coast stopping to watch a large flock of feeding Black-billed Gulls. We then headed up to Punakaiki and the Pancake Rocks with its nesting Red-billed Gulls and dainty White-fronted Terns, as well as Western Weka and splendid Tui feeding on the flowering Flax, plus lots of tourists! A great meal finished off the day.

Sun setting on another great day 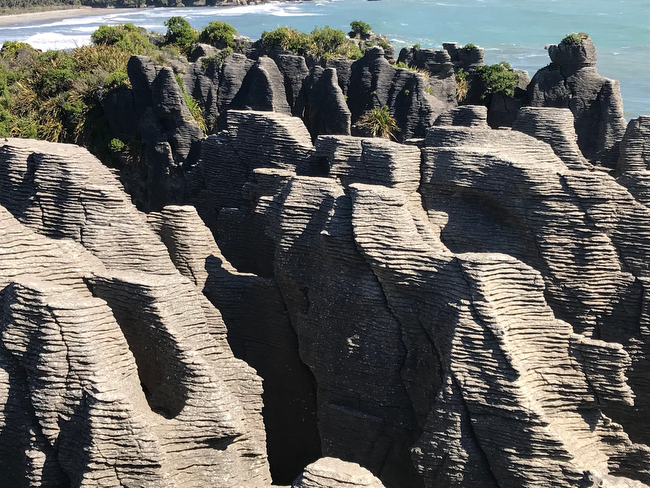