Matt’s tour around the South

DAY 14  Heading south on the West Coast, the first stop was at a sewage ponds just outside Hokitika – well it is a birding tour!  NZ Scaup, Grey Duck and Aussie Shoveler were seen. A bit further down we did some more roadside birding as watched our first Great Egret try to devour a large eel from a creek. Another four egrets were seen as we headed south. After lunch we walked a bush trail and added another new bird to our tour list, as a South Island Robin sang right above our heads. A bit further down the trail we had great views of South Island Tomtit.  That night we went out to try and get our third Kiwi species and met Mike from Ian Cooper’s Okarito tours, who after a bit of a wait found us two male kiwis fighting each other, with sticks cracking and bushes moving around, the snorting and growling and the thuds of powerful kicks being landed it sounded like a doozy of a fight.  Needless to say Okarito, the rarest kiwi, joined the list.

DAY 15  After a late night we had an easy start and headed to Franz Josef Glacier to see the rapidly receding ice and adding Green Hood Orchid to our sightings.  Driving south through the stunning West Coast scenery next stop was a bush walk down to a secluded beach where we got our first glimpse of Fiordland Crested Penguins coming ashore, fantastic!  Next stop was in spectacular beech forest and our first opportunity to find Yellowhead.  Birds were calling some distance away, we had to make do with Brown Creeper, Yellow-crowned Parakeet and fantastic views of Rifleman.  Great Indian curry finished the day.
DAY 16  5.58am our van rolled out of the motel as we had a big drive ahead of us and three target birds.  First stop at the Cardrona Range to watch the sunrise which was breathtaking, and then onto Te Anau where the van got a well earned drink, as did we.  Ours was pie and coffee.  On to Milford Road to Homer Tunnel.  Blue skies, no wind, conditions were just right, would the star performer show?  Simple answer was that we had stunning view of Rock Wren that seemed to like the attention of the birding paparazzi.  Eating celebratory lunch bird number two appeared on cue, the wonderful charismatic cheeky kea made it to our list.  A bird that we would have probably seen at Arthur’s Pass but due to a bridge collapse causing us to miss that area, it was a relief to see this wonderful alpine parrot.  After lunch a drive through the tunnel to Mlilford Sound for the stunning vistas then back on the road to Te Anau for target number three.  We had a leisurely hour sitting at the riverbank watching Black-fronted Tern hawk over the river.  That night as we ate dinner at the restaurant we agreed that Fiordland and its birds had delivered one of our favorite days on tour.
DAY 17  Homeward bound.  Well for me at least. For everyone else their first trip to Stewart Island.  Arriving at Bluff, bags checked in and across the Foveaux Strait we soon spotted our first Foveaux Shag along with hundreds of Common Diving Petrels and a single Hiutton’s Shearwater in amongst some Sooties.  After lunch a short water taxi ride to Ulva Island with the aim of seeing our first South Island Saddleback and Yellowhead.  First spotted was Stewart Island Robin and Red-crowned Parakeet and then we were treated to fantastic views of male and female South Island Saddleback feeding on a dead Rata tree and finding juicy Weta to eat.  Further up the path several Kaka were spotted and then a call that we’d heard a couple of days before grabbed our interest as we watched a pair of Yellowhead feed on the ground in front of us.  The three hour walk on Ulva Island whizzed by as we found more Saddleback, Yellowhead, Brown Creeper and Stewart Island Weka.  That night we finished off a long day witnessing a very inquisitive female Stewart Island Brown Kiwi walk up to us and continue to feed and a bit later as we’d headed home a very large adult female kiwi popped out of the bush and walked down the path in front of us.  Everyone slept well that night.
DAY 18  Stewart Island can make or break a tour and our full day pelagic proved the former!  As they say down in these parts there is boating weather and birding weather and today was birding weather.  Rolling seas, drizzle and reasonable wind provided us with 19 tubenosed seabirds.  But first we started with Fiordland Crested Penguins and then further on, two Yellow-eyed Penguins.  Next was a fantastic aerial display by three Southern Brown Skua.  Ian Wilson of Aurora Charters pointed the boat south towards Wreck Reef for our first chumming spot, the birds came thick and fast; Southern Royal Albatross, White-capped and Salvin’s were first behind the boat followed by at least 20+ White-chinned Petrels, Sooty Shearwaters, Northern Giant Petrel and Cape Petrel were not too far behind.  A shout went up as the diminutive Grey-backed Storm Petrel skipped into view.  After another five minutes, Wilson’s Storm Petrel appeared.  Then our first Mottled Petrel appeared, this powerful pterodroma whizzed past the boat showing all its ID features. The whole group got onto quickly it, as on Ulva Island the day before we’d had the chance of sharpening our ID skills by finding a freshly dead Mottled Petrel on the beach.  It’s good to get a lifer that is alive!  Finding a sheltered cove for a lunch break and not a bird in sight, and just like magic there was a Buller’s Albatross sitting at the back of the boat by itself, a bird not easy to find at this time of year.  After lunch it was back onto the big seas and the wind picked up.  In amongst the growing numbers of White-chinned Petrels a Westland Petrel was spotted.  Cook’s Petrels were seen and more Mottled plus fantastic views of several Broad-billed Prions that flew in amongst Fairy Prions.  Always fantastic to see.  Searching carefully through Sooty Shearwaters a couple of Short-tailed Shearwaters were found. Then our third stormie of the day appeared a white -faced storm petrel found the boat. We were about to head for home when our 8th albatross species of the tour flew into focus, the beautiful Campbell Island Albatross.  As we headed into Halfmoon Bay feeling tired and damp, and some of us a bit queasy we tallied up our total having found 19 tubenosed seabirds and 3 penguin species, not a bad day at all! During our time on Stewart Island we added 13 new species to the tour total. Good old Stewart!! 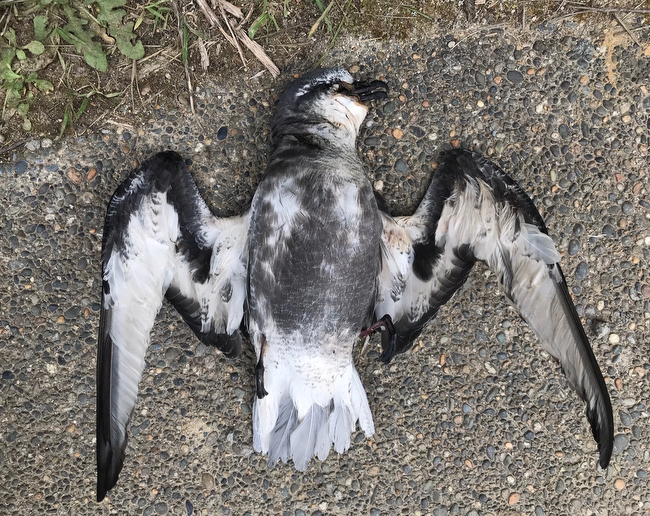 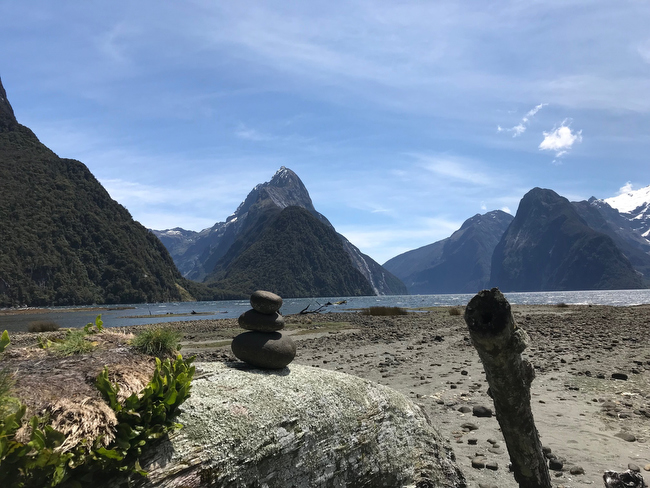 Mitre Peak in Milford Sound in the sunshine 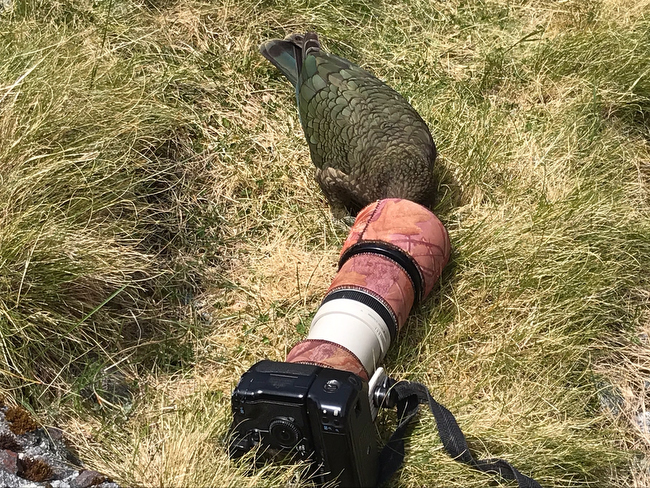 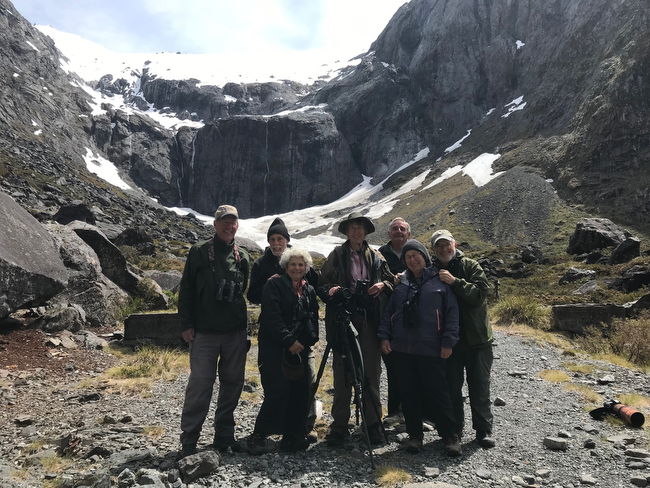 The troops at Homer Tunnel