DAY 4   One the highlights of the tour is overnighting on Tiritiri, and it did not disappoint. The first birds seen were a pair of Kokako, followed by NI Saddlebacks, NI Robins, stunning stitchbirds, and a bit of a bonus was a showy female Rifleman and Whiteheads.
In the afternoon we found Fernbirds and Red- Crowned Parakeets, and awesome looks at a pair of Spotless Crakes. While heading back to the bunkhouse we had a bit of luck in finding a pair of Takahe with there fluffy black chicks.
After a BBQ meal, we were out looking to add Little spotted Kiwi to our list!  We were back in the bunkhouse before midnight, having seen four different individuals, as well as little Blue penguins coming ashore.
DAY 5  The next morning we left the island, and south through Auckland to Miranda, tide was right as we saw our first Wrybill, Pacific Golden Plover, and the tiny Red-necked stint of the tour. And a supporting cast of NZ Dotterel, Bar-tailed godwits, Red Knot, Pied stilts, and Royal Spoonbills. A bit unusual was at least 6 Brown teal.  Fantastic fish and chips finished off a great day.
DAY 6  The weather  at Whitianga was way to rough  for our planned pelagic unfortunately, so a quick reshuffle saw us heading south to Purerora. But the high winds had followed us inland and it made it hard work, but we still found Kaka, Yellow-crowned Parakeet, NI Tomtit, NI Robin, Whitehead, NZ fantail,and Rifleman. 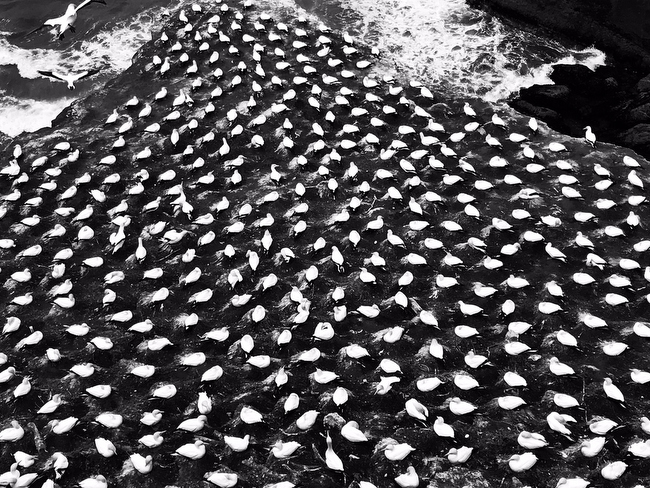 Australasian gannets on their nests.

The gang on Tiritiri Matangi Island. 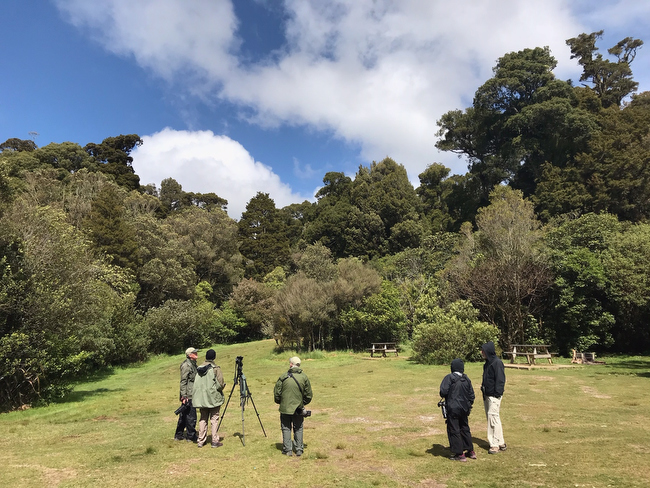 The sun sets on another days birding.