This bird was seen in the company of other red-billed gulls, Larus novaehollandiae, at Waitangi, near Clive in Hawke’s Bay. At first glance the bird was assumed to be a red-billed gull. The very strange pale ‘orange’ legs were what first drew my attention to the bird, and following the discussion on BIRDING-AUS with regards to the strange Silver gull seen in Australia, I quickly posted these shots without first considering the possibilities……only to be alerted to the fact I had posted photos of a juvenile Black-billed gull!! 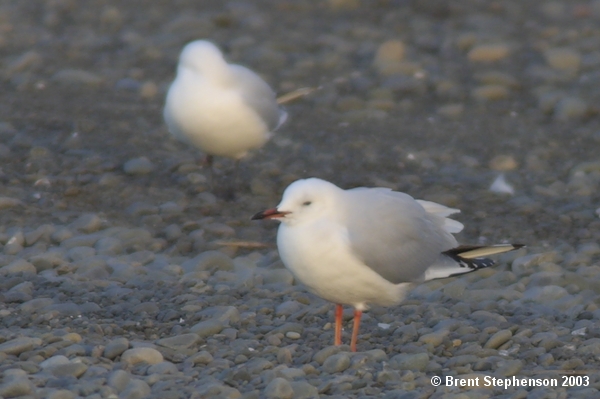 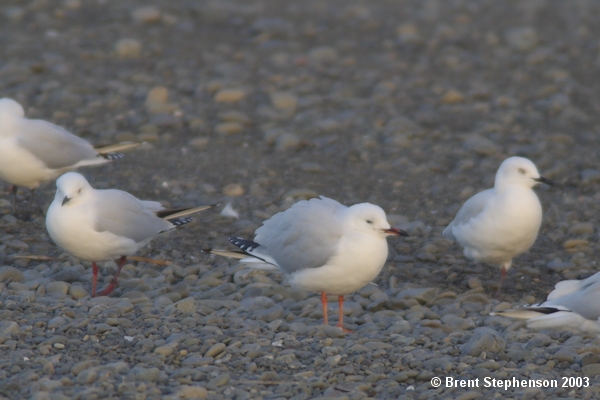 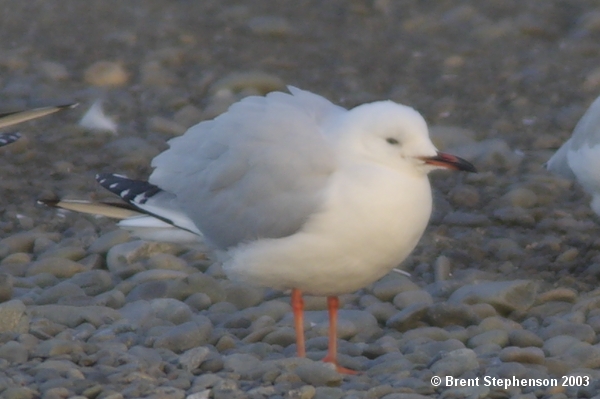 This bird does indeed have very pale legs, but not to the same extent as the bird seen by Vin who posted some excellent photos posted at http://yallara.cs.rmit.edu.au/~vhl/unidentified.html

Since I posted this, I have been alerted to several other ‘sightings’ of red-billed/silver gulls like this. Frank O’connor from WA, Australia has a page with quite a good discussion and photos of a very yellow-billed individual – check out http://members.iinet.net.au/~foconnor/birds/species/silver_gull.htm and another sub-adult bird – with black primaries – was reported by Jo Wieneke on Birding-Aus in 1996 – take a look at http://menura.cse.unsw.edu.au:64800/1996/07/msg00020.html

Of interest interest is the fact that nobody, except for one New Zealand birder, commented about my mistake. At least 50 odd people (mainly BIRDING-AUSers) had checked out this page before I realised my mistake. Yet nobody realised my mistake, or were too polite to do so!! This raises the question as to whether a black-billed gull would in fact be recognised as such in Australia…..or whether it might pass unnoticed!!