Well Steve Wood keeps coming up with these problems….During a recent pelagic trip (2 May 2006) out of Houhora (Far North, NZ), Steve Wood saw and photographed this very pale and well marked Pterodroma petrel. As Steve describes:

“East of North Cape, 20 miles approx. The first thing I noticed was how bright and well marked this bird appeared – similar plumage colouration to a fairy prion. Just the one bird seen, no Cook’s petrels seen the whole trip (3 days). As for size, it might have been bigger than a Cooks if anything, not smaller, but nothing handy to compare it with. Slower, laboured flight not fast zig-zag like usual Cook’s tend to be.”

The suggestion is that this bird is a freshly fledged juvenile Cook’s petrel. If so it would be interesting to know what the birds look like when they arrive in the northern Pacific, and if birds like this are seen amongst the adult Cook’s petrels in that area. If so I guess North American birders will be seeing increasing numbers of these over the next few years, as a result of the eradication of kiore (Rattus exulans) from Little Barrier Island, and the spectacular increases in Cook’s petrel breeding success subsequently recorded by Matt Raynor.

Take a look at the photos below and email us your thoughts…..we will post them here on this page. An update of this page will be performed mid-2006. 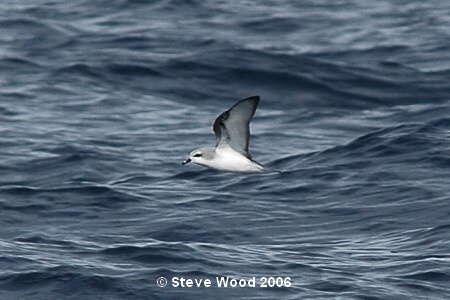 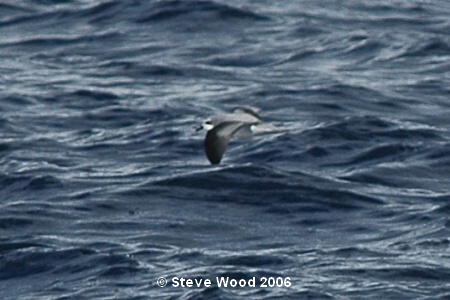 The above photographs are copyrighted by Steve Wood. If you would like to use them, then please contact me first. Reproduction in any form without consent is not permitted.

Alvaro Jaramillo – I would go with a Cook’s Petrel on this one, a fresh bird based on the face pattern, neck coloration and pattern, bill size. It certainly does not look like the Cookilaria I have seen on the other side of the pond (Masatierra/DeFilippi’s, or Stejneger’s).
Interesting point you make about North American sightings. Cook’s is still a very, very hard bird to see on the Pacific Coast of North America. Last year was a banner year and appears to have been associated with warm water (offshore water) being close to the coast during our fall (Aug-Sept). I got to see one here in California last year, not all that different in look from the bird pictured on the site. I hope you are right and numbers up here do increase, it will give us more to look for.

Tony Pym – I believe that it’s a Cook’s Petrel, one of this season’s birds that has fledged in the last couple of months. It ‘looks’ wrong for de Filippi’s Petrel – here’s one of my photos of that taxon. I note Paul’s comments on relative tail-length between Cook’s and de Filippi’s. I had not heard of this before but it seems borne out when comparing the shots. Steve’s bird is all wrong for Stejneger’s (lacks the dark crown and white forehead of that species). 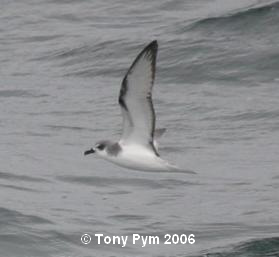